Repurposed (Active)
JAQL is an alias under the LapFox Trax / Halley Labs label. He is a dog that makes dubstep, footwork and hiphop. When he was retired, some of his songs were re-released under Klippa. JAQL later came out of retirement, this time to the LapFox Trax label, with the release of Retourne.

Spit On Your Rave - Retourne 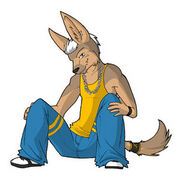 JAQL as he appears in Step on Stage from Mungyodance 3: The Third Rave.